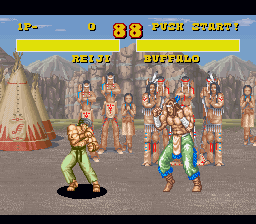 Gouketsuji Ichizoku is a one-on-one fighting game by Atlus and conversion of their own arcade game originally released in 1993. For 165 years, a tournament has been held to determine who will become the leader of the Gougetsuji Clan. Gouketsuji Ichizoku features eight playable characters : Annie Hamilton, Keith Wayne, Reiji Ooyama, Hattori Saizoh, Angela Belti, White Buffalo Thin-nen and the old grand-ma Gouketsuji Otane. The final boss of the game is no one else than Gouketsuji Oume, current leader of the clan and twin sister of Gouketsuji Otane. The game offers elements and controls that will instantly look and feel familiar to any fan of the genre (especially to fans of Capcom's Street Fighter series). Players have an arsenal of moves at their disposal - from weak/strong punches and kicks to special moves activated using traditional quarter and half circles on the D-Pad. The latter can unleash each fighter's true potential, from traditional 'Spiral Kicks' and 'Dragon Punches' to less traditional 'Flying Denture Attacks' and 'transformations'. As expected, this Super Famicom conversion features a couple of extra play modes such as Vs. Battle, Practice Mode, Time Attack, Life Attack and even a Karaoke mode.