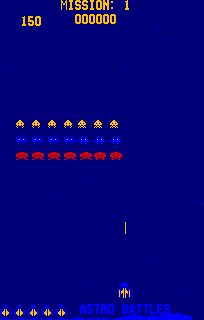 The player's goal is to defeat the Gorfian Empire and safeguard the future of mankind. Gorf is a single screen shoot-em-up in the classic "Space Invaders" mould, the prime difference being that Gorf offers five distinct levels of shooting action. The levels are as follows :

* Mission 1 - Astro Battles : The first mission is more or less a straight clone of "Space Invaders", set against a sky-blue background. The player is protected by a glittering parabolic force field, which is gradually worn away by enemy projectiles. The force field also works in BOTH directions, and therefore must momentarily deactivate in order for the player's ship to fire out. To advance to the next mission, the player must destroy all the invaders.

* Mission 2 - Laser Attack : The other missions are all set in space. In this mission, the player is faced with two formations each made up of five enemies. The formations are cross-shaped, and at the bottom of each formation is a single laser gun. The laser guns fire a long, dangerous yellow beam at regular intervals. At the same time, the other enemies may break formation and attempt to dive-bomb the player. Destroying a laser gun causes the corresponding formation to break apart. To advance to the next mission, the player must destroy all the enemies.

* Mission 3 - Galaxians : This mission is a clone of "Galaxian". The player is faced with a swarm of galaxians, which continually dive-bomb and shower the player with deadly projectiles. To advance to the next mission, the player must destroy all the galaxians.

* Mission 4 - Space Warp : A wormhole is situated in the middle of the screen out of which enemies ships emerge, one at a time, and spiral outward at increasing speed; whilst growing larger and flinging fireballs at the player. The Space Warp level would have an influence on Konami's superb "Gyruss", released two years later. To advance to the next mission, the player must survive a number of these enemies.

* Mission 5, Flag Ship : The final mission is a one-on-one confrontation with the alien Flag Ship itself. The Flag Ship is one of the earliest examples of the 'boss' enemy in mainstream video games. It is equipped with its own force field, through which the player must blast in order to get a clean shot on the ship. It is also armed with a powerful fireball weapon. The player's weapon has a minor effect on the Flag Ship's hull, and can only blast off tiny pieces of it. This adds to the player's problems, as stray pieces of hull can destroy their ship. These pieces can be destroyed with a single shot. The only way to destroy the Flag Ship is to hit the glowing reactor at the heart of the ship, either by first blasting away the hull to expose it, or by managing to fire a shot directly into the tiny vent that leads to the reactor.

Each time the Flag Ship is destroyed, the player advances in rank. Initially, the player begins with the rank of Space Cadet, before moving on to Space Captain, Space Colonel, Space General, Space Warrior, and finally Space Avenger. The player's spaceship is equipped with a Quark Laser which allows the player to cancel a poorly aimed shot and fire another shot.