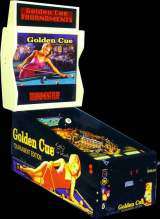 Designed by Sega Pinball and Incredible Technologies, the makers of the well known "Golden Tee" golf games. Like Golden Tee, this game was designed to be linked to other games and tournaments across the country, with prizes awarded to high scorers.

Shown at ATEI in 1999, Golden cue's rules were not completed and the game was not officially released by Sega; only a few test games were made (approx. 10 units), and it was later redesigned into Stern's 2000 "Sharkey's Shootout".