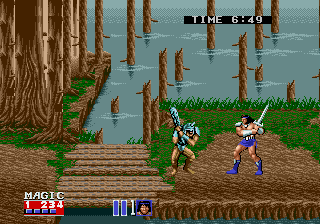 Not long after the malign reign of the Death Adder has ended, another evil rises. The peace of the land has again been threatened, this time by 'Dark Guld', who was supposed to be imprisoned but apparently is not. He has instead now gotten his hands on the Golden Axe, and is using it for his own nasty purposes, and with his minions is causing much chaos.

So once more, Ax-Battler, the fierce barbarian; Tyris-Flare, the fearless Amazon; Gilius Thunderhead, the ferocious dwarf, rise up to deal with the oppression, with their might and magic, and recover the Golden Axe.