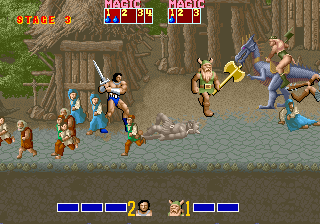 Golden Axe is a sideways scrolling beat-em-up set in a traditional fantasy world, in which up to three warriors take up arms to rescue the kidnapped King and his Queen from the evil Death Adder.

The game's three different playable characters are an Amazonian warrior named Tyris Flare, a Barbarian hero named Ax Battler, and a Viking dwarf named Gilius Thunderhead. Each character has a special attack move that is activated by pressing both JUMP and ATTACK at the same time. Also, double-tapping the joystick right or left will make the character charge and smash into opponents.

At certain points during the game, players will come across enemies riding creatures (such as dragons). If the player knocks the original rider from the saddle, the created can be mounted and used against the enemy.

At certain points during a level, as well as on the between-stage intermittent levels, Thieves appear carrying a sack on their back. Players can hit the Thieves causing them to drop food and magic potions - the latter of which are used to create a special magical attack that damages or kills all on-screen enemies.

Golden Axe consists of 9 levels, although only 5 of these are true levels as every 2nd stage is a short intermittent level featuring only the sack-carrying Goblins.