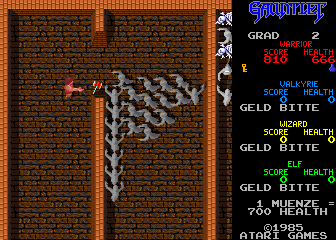 Gauntlet is a maze-based shoot-em-up for up to four players. Heavily influenced by classic fantasy conventions, players take on the role of either Thor the Warrior, Thyra the Valkyrie, Merlin the Wizard, or Questor the Elf and must play cooperatively as they explore and fight their way through the enemy-packed mazes. Competitive play is encouraged as players must fight for the limited amount of food, treasure, magic potions and power-up items that litter the dungeons.

Each of Gauntlet's four characters have different strengths and weaknesses: Thyra has the strongest armour, Thor is best at hand-to-hand combat, Questor has the fastest speed and Merlin has the most powerful magic attacks. The object of the game is simply to survive as long as possible while exploring Gauntlet's mazes in search of treasure, food, magic potions and, ultimately, the exit that leads to the next dungeon.

The potions - shown as blue bottles - that litter the levels offer either improved character abilities (such as 'speed' or 'extra shot power') or can be used as a 'smart bomb', destroying some or all of the on-screen monsters. Potions are also the only way to kill the game's 'Death' character that appears in many of the stages. Magic potions can be kept and used at the player's discretion by pressing 'Magic' button, although each potion can only be used once.

The first seven mazes are always the same, but from level 8 onwards, players will find themselves on any one of over a hundred different mazes. If players survive for long enough, the mazes will be repeated in a different order. How long a player lasts depends upon the player's 'health' level. Health continually depletes as time progresses and further health is lost by contact with various monsters or their projectiles. Health can be replenished by consuming the food found in the mazes or by inserting more credits. The many treasure chests that litter the levels can be plundered for points, and collecting treasure increases a player's score multiplier when two or more players are playing the game. 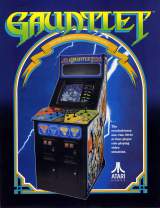