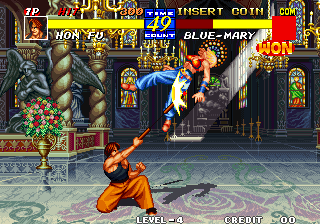 During a trip to Southtown to attend the inauguration of a new branch of Pao Pao Cafe by former street fighter Richard Meyer, the lone wolves (Terry Bogard, Andy Bogard, Joe Higashi & Mai Shiranui) are unwillingly caught in the middle of a desperate search for the Shiranui Scrolls and the mysterious fighters that are after them! The game features a new graphic style, 2 different background planes to fight, a grade system that shows how well you perform in battle, lots of hidden moves & combos, as well as multiple endings based on your performance. The answers shall only be uncovered by a long & fierce battle, are you up to it?