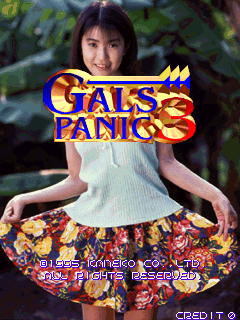 Gals Panic 3 is a variant of the classic puzzle game "Qix" where the player works to uncover the highlighted area of the play space to reveal a girl. The player gets to select which girl to uncover before each stage. When a player reveals 80% of a girl the stage ends and the player is shown the entire background image. If the player reveals 100% of the silhouetted image, then he is shown a series of different photos of the current girl before continuing on to the next stage. Between stages there are mini-games where the player can win the chance to see an image of another girl.