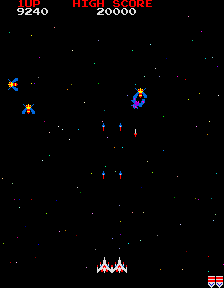 Galaga is a single-screen shoot-em-up in which the player controls a 'Fighter' spaceship and must defend the home planet against the on-coming hordes of alien invaders called "Galagans". The Fighter can only move left and right along the bottom of the screen.

Galagans fly onto the screen in a variety of formations before forming troop lines at the top of the screen. Once all troop lines are formed the Galagans separate and start attacking the player's Fighter in ones, twos and threes. The top-line Boss Galaga need to be shot twice before they are destroyed.

The Boss Galaga has a tractor beam that can capture the player's Fighter. A captured Fighter changes color from white to red and stays with that particular Boss until it is destroyed. The Fighter can be retrieved by destroying the Boss that captured it, but players must be careful not to destroy the captured Fighter itself, or that Fighter is lost. A rescued Fighter changes color back to white and links up with the player's current Fighter, doubling its fire power.

As players progress through each screen, the speed and number of alien attacks increases. Alien formations also become more complex, making the aliens harder to shoot.

Bonus Fighters are awarded periodically throughout the game, as players reach specific point values, as dictated by the 'Bonus Life' dip switch setting. Each enemy ship also has an assigned point value (see Scoring below).

In Stage 1, the enemies do not drop bombs as they fly onto the screen. However, they do so in most of the later stages.

From Stage 4 onwards, a squadron of special bonus enemies called "transforms" start appearing. They're called transforms because Bees will begin pulsating and move out of formation to change into these bonus enemies. They appear in the form of yellow scorpions in Stages 4, 5, and 6, green 'Spy Ships' from "Bosconian" in Stages 8, 9, and 10, and Galaxian Flagships in Stages 12, 13, and 14. After that, the three different transforms are repeated in the same order. Transforms are always worthwhile targets because they are not very aggressive and are worth more than the other enemies. If all three transforms are destroyed, extra bonus points will be awarded.

Galaga also features CHALLENGING STAGES, these consist of 40 Galagans that fly onto the screen in formations but do not drop any bombs. The object is to shoot as many of them as possible before they leave the play area. When an entire formation of eight Galagans is destroyed, bonus points are added to the player's score. If all 40 aliens are destroyed, players are awarded a special bonus of 10,000 points.

Two new gameplay features Galaga introduced are :
1) Players are given the chance to double their fire power.
2) The game has a rapid fire (automatic firing) option, whereby the player simply holds the FIRE button down and the space fighter continues to fire at the Galagan army in bursts of two missiles each.