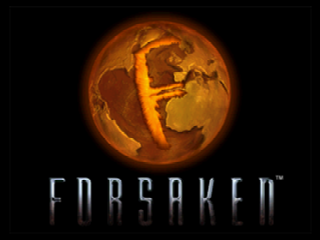 Forsaken 64 is set in the far future, when Earth has been ripped apart by an uncontrollable fusion reaction. Although the planet's fragmented remains have been forsaken by all intelligent beings, a treasure trove of loot in the form of energy sources and weaponry lures all manner of bottom-feeding intergalactic scum seeking a piece of the action. Oblivious to the swarms of mutant creatures and automated defense-systems that guard the remains, these scavengers seek wealth and power at great hazard.

The fun begins when you mount gravity-defying bike-like vehicles called pioncycles and become one of these interalactic rogues searching for hi-tech booty scattered throughout underground complexes of twisting tunnels that link cavernous chambers. Overall, the feeling and atmosphere of the game are quite similar to the PC game Descent. However, the environment seemed less disorienting because the thoughtful developers at Iguana UK have added some gravity-like effects that will gently orient your bike to the floor if you turn upside-down.

Forsaken 64's atmospheric surroundings swarm with enemy vehicles. You have access to a wide variety of weapons and power-ups. Your first person view on the action includes a heads-up-display that gives you data on your energy and weapons status.

The game comes with an arsenal of 14 weapons, including sundry mines, missile launchers and energy weapons. No mere eye candy, the advanced graphics are tightly integrated with game play. For example, the real-time light-sourcing for energy weapons projectiles allows you to actually detect enemies hiding around corners by looking for their shadows as an energy bolt passes them.

Forsaken 64 feature 22 forbidding single-player missions and eight multiplayer arenas. Some of the single-player missions will require solving puzzles and accomplishing complex tasks. Advanced AI will allow your foes to use the different terrain features to their best advantage in eliminating you. The multiplayer arenas are twisting labyrinths of giant chambers and tunnels that will offer hours of friend fragging fun.