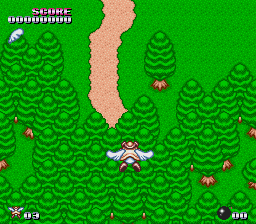 Flying Hero is a cute, and sadly rare, vertical shooter by Sofel. The player takes control of an egg shaped and winged character. He can fly in the air and fires various projectiles at his enemies. The princess of the kingdom has been kidnaped and our hero seems to be the only one capable of bringing her back and free all the visited regions along his harrowing journey. Power-ups are often hidden inside balloons and the most important items of all are certainly the delicious floating cherry shortcakes. Three cakes upgrade our friend's active weapon and large-cakes can even boost-up his firepower to the maximum. Various weapons are of course available, including a simple rapid-fire, power-beams or small clouds. Interestingly, the fire direction can be controlled instantly with the controller's shoulder buttons, and pressing both simultaneously fires right behind the character. Also, tiny (and rather ugly) bug-like flying creatures can be collected and used as options that flies close to our friend and attack anything in sight. Finally our hero can also use a limited amount of bombs, flashing like giant sparkly fireworks. Stages are long and varied and often hide several bosses.