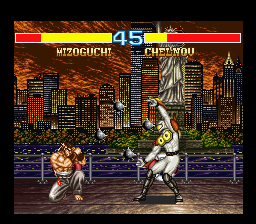 The game was originally planned as a port of Fighter's History Dynamite for the Super Famicom. There is a new game mode exclusive to this game called 'Mizoguchi', an story mode where Mizoguchi is the protagonist. The story of the single player 'CPU Battle' takes place after the events of Fighter's History Dynamite. In addition to the 'Versus' mode, there is also an 'Extra' mode with the 'Survival' mode of the first SNES release (five-on-five elimination matches), as well as the new 'Tag', and 'Practice' mode. Practice mode features both Free training and Exercise missions.

Only 8 of the 13 fighters from Fighter's History Dynamite return, due to cartridge size restrictions. Ray, Matlok, Samchay, Jean, and Marstorius have been cut from the roster, but still make appearances during the cutscenes of the Mizoguchi mode. Most of the eight fighters have been given new special attacks and slight changes to their outfits. Chelnov is the game's final boss and is playable via a code.