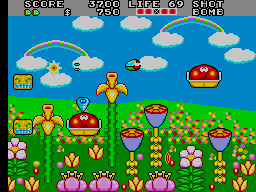 Once again you control Opa-Opa, a pretty colored ship with wings on its side and must destroy the large creatures in each world before moving on to the next. Your task becomes difficult by other small creatures that happen to pass by. If you destroy a large creature, they will drop a dollar bill, which you can pick up and use at the shop to buy items and powerful weapons such as laser beams, x-way shots, and big wings. Another way to get money is to shoot certain kinds of enemies all in a row.