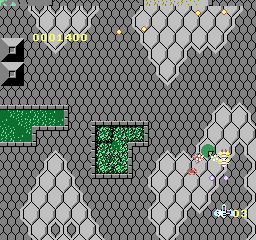 Exed Exes is a vertical shooter by Tokuma Shoten and conversion of an arcade game originally released by Capcom in 1985. The game takes place in the midst of a raging war - insect like creatures called the Exes have invaded Neg-Nin, a far distant planet in a remote galaxy, thousands of light years away from Earth. Scientists on Neg-Nin started to build a warship in reaction to the sudden bug invasion. The fighter comes equipped with a particle cannon which can be upgraded to double or triple laser beams by collecting special Pow icons dotted around each level. Unlike most other shooters of its kind, upgrades in Exed Exes are not cumulative, and specific Pow icons power-up the craft to the lowest, middle or highest power level (some, called woP even downgrade the main weapon). The ship comes with a limited amount of Mega Crush bombs that clear all enemy bullets from the screen. Levels follow a traditional structure, with waves of all kind of multicolored insects (bees, beetles, flies, dragonflies), large bugs and ground cannons that relentlessly bombard the player. Also, through several levels, the player automatically enters bonus phases called Hi-Point Areas. The background turns black and different types of enemies (usually skulls) slowly move down the screen. They can easily be destroyed, but collecting special Pow icons instantly turns them into fruits for extra points. Each level ends with a boss battle, and each one of them is made out of different components (skulls, guns and flashing cores) that need to be destroyed in order to proceed to the next stage. Exed Exes features a two-player simultaneous option.