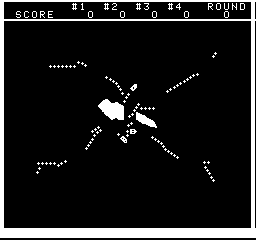 Embargo is a one to four player blocking genre game. Each player must deposit a coin. There is a stylized map of Cuba (with a canal through the center) in the middle of the screen. There are four boats, one in each corner of the screen. If there were less than four players then the computer played the remainder. As the boats sail out they leave a continuous trail of mines behind. The players can control the direction and, with a single button, stop two mines from being laid in every twelve.

Each time a boat hits another boat, a mine, the screen edge or Cuba, it explodes and the surviving boats each get one point. This continues until zero or one boat is left. (If two boats collide they both blow up.) I believe there were four rounds per game. The strategy was to block off as much open water as you could while leaving a hole in your line of mines so you could double back and duck through it. 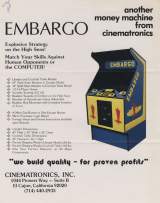