The full 1.3d version of the game, developed by 3D Realms, of which Episode One: L.A. Meltdown was freely available as shareware. 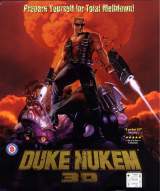