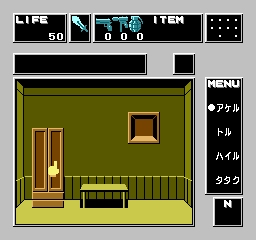 Dr. Chaos is a side-scrolling action adventure developed by Marionette and published by Pony Canyon. The genius scientist Dr Ginn Chaos has gone missing. Before his disappearance, he was actively working in his large mansion on a device allowing access to alternate dimensions. Armed only with a knife, his brother decides to look for him and ultimately unveil the mystery behind the incident. Something obviously went terribly wrong with Dr. Chaos's experiment, and the goal of the game is to locate all the eleven dimensional warp-zones hidden within the mansion, as well as assembling a powerful laser gun, the only weapon capable of taking down the last boss. The house is deceptively large and filled with rooms and eerie creatures. Although most of the exploration takes place in a side-scrolling fashion, the screen switches to a first-person view as soon as the player enters a room. There, a menu allows the player to open doors, windows, drawers or closets in order to find new weapons (gun, machine gun, grenade, ammo) or life saving items (mainly health potions). Rooms lie at the heart of the gameplay and hide many secrets - for instance, hitting a wall can reveal secret passageways or release special items. The dimensional zones can only be accessed from these rooms, and they all follow a traditional side-scrolling structure, each ending with a boss. Defeating them reward the player with a piece of the laser gun, as well as some special items, such as the Zone Detector (which helps in locating the remaining zones). 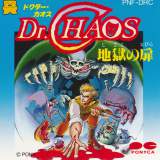