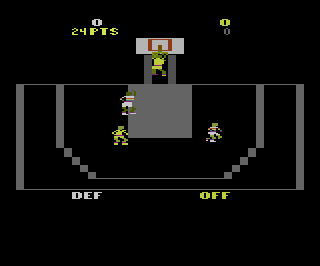 The two players of each team have different playing skills. Mr. Inside (the bigger player) is great at rebounding and blocking shots, can dunk his shots easier, and sets picks for Mr. Outside. Mr. Outside (the smaller player) is adept at stealing the ball and is great at making long shots.

If a player is very close to the basket when he shoots, he will dunk the ball. After an opponent misses a shot and you get the rebound, you must clear the ball by moving your player until both feet are behind the 3-point line before you can shoot for a basket.

If your team is on defense, you can either attempt to steal the ball or jump to block a shot. To attempt a steal, press the fire button while your defensive player is close to the ball carrier. Make sure the ball carrier is dribbling when the attempt is made.

To block a shot, wait until the ball carrier jumps for the shot. Time your own jump to most effectively block the shot.