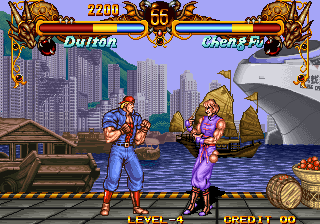 A head-to-head fighting game based on the 1994 Double Dragon movie, the game features a roster selectable which consists of "Double Dragon" alumni Billy, Jimmy, Marian, Abobo and Burnov, as well as 5 original characters as they enter a martial arts tournament to take out evil crime lord of Bloody Town, Koga Shuko. Unique features in the game includes destructible environments and a super move meter which fills out based on how much energy the player has left, giving weaker fighters a handicap. After defeating the default 10 fighters, the player faces Shuko's bodyguard, Duke, before fighting Shuko himself.