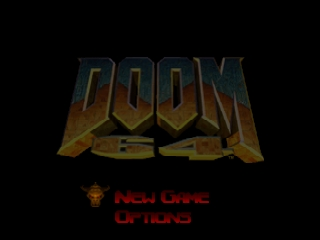 Williams and ID Software teamed up to bring the hottest PC action game to the Nintendo 64. Doom incorporates texture-mapped 3-D rooms, multiple weapons, challenging enemies, and surreal sound into one of the most heralded games ever. Players move from area to area, through narrow passageways, vaulted rooms, and dark tunnels on their quest. The concept is basically "good vs. evil" in which you, as a representative of good, must seek out and defeat alien demons.

The Nintendo 64 version of Doom contains new levels, enemies, and enhanced graphics not available in any other version. There are 32 levels in all, but many are accessible only through finding all the secret exits in other levels. Parts of each level are straight-forward: if it moves, shoot it. But you'll also have to find keys, hit switches, and keep track of your location. A switch may open one door, but close another.

Weapons vary, and you must find the more powerful weapons as you play. The Pistol and Shotgun are o.k., but you'll do much better against some enemies with the Super Shotgun, Chain Gun, Rocket Launcher, Plasma Gun, BIG 9000, or Laser. The Chainsaw works great when you're in close, but don't try to use your bare fists unless you've found a Berserk Patch.

The enemies in this game are very dark. You will face Zombiemen, Specters, Pain Elementals, Imps, Hell Knights, and many others on your way to the final confrontation with the Mother Demon. Doom 64 is not for the faint of heart!