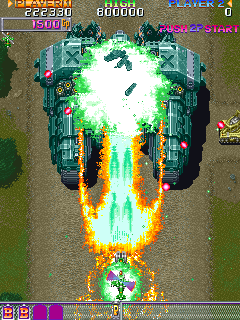 An excellent vertically scrolling shoot'em up. The player assumes the role of a pilot who is sent by their squadron to fight their former allies until one side destroys the other, all of which is a part of a mission to strengthen the military power that controls each side. The player flies their selected fighter over 5 areas of various terrain, encountering a number of land, sea and air enemies. The player's ship has two modes of fire : by tapping the fire button, shots are fired; holding it down produces a concentrated vertical beam, but also reduces the ship's speed.

Developed by Cave, this is their first game (released in May 1995).

DonPachi is one of only two Cave shooters to get released in the USA, the other being Progear no Arashi. Both US versions of these games are extremely rare and sought after since only a small handful were made for the American market.

The name of the game is a pun; the kanji for DonPachi literally means 'leader bee', but the word 'don' is also a Japanese onomatopoeia for the sound of a gun firing. There are a number of references to bees in the game : the most obvious is the bee icon that can be picked up for high scores. The transition effect between levels is tiled, made up of red hexagons, which resembles a bee hive.

The plot of this game is quite 'cheesy' : you fight your own comrades in order to become the ultimate fighter, the 'DonPachi elite team!'.

Kenichi Takano and Tsuneki Ikeda (see Staff section) were ex-Toaplan employers. It seems that Tsuneki Ikeda was one of the programmers behind "Truxton", hence the red/blue/green ships colour (for player1 of course). He should also be the 'Ikeda in Maeba' guy appearing in "Batsugun"'s credits.

The 'English' text that appears against the 'WARNING' message upon approaching a boss reads : THIS IS NOT SIMILATION. GET READY TO DESTOROY THE ENEMY. TARGET FOR THE WEAK POINTS OF F**KIN' MACHINE. DO YOUR BEST YOU HAVE EVER DONE.

The US version is slightly different, it has the "Winners Don't Use Drugs" screen.

DonPachi features a scoring system known as Get Point System (GPS). By destroying large groups or chains of enemies in a short period of time, you can build up a number called a combo, similar to the kind found in fighting games. You receive an increasing number of points with every enemy you shoot down; the more enemies you hit in one chain, the more points you receive. You can break the chain by waiting to shoot an enemy; the combo number will turn blue when your chain is broken. This system brings a new challenge after the player has cleared the game; plot out the stages to achieve a high score.

After completing an area, player gains following scores based on performance in the completed area :
Star : 10000 points per item collected in the area using current live.
Bombitem : Player gets additional points for having less than 7 maximum slots. Player initially gets 100,000, 60,000, 30,000, 10,000 points for 3, 4, 5, 6 bomb slots respectively. If player manages to complete successive areas with only current life, the bombitem bonus increases, up to 5,000,000 points.

If 2nd loop is completed with 1 credit, player gets 1 million points for each reserved fighter.

* Hits : if you destroy multiple targets within an very short time range (indicated by a green colored bar), a hit counter starts and after 10 hits it will be visible in large letters. Once your hits are too slow, the counter stops and disappears.

* At the 2nd loop, all targets destroyed releases bullets towards your ship.