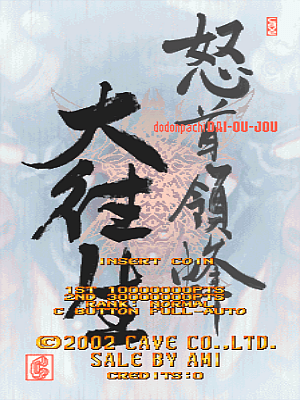 Developed/Produced by Cave and Sales by AMI (Amusement Marketing International).

The title of this game translates from Japanese as 'Angry Chief Hornet : Peaceful Death'.

The game is known outside Japan as "DoDonPachi 3" (Literally :Angry Chief Hornet 3).

It is rumored that only 5 players have cleared both loops of the game, 12 months after it's arcade release.

* Hits : When an enemy is killed, if the player kills another one in a short, specified time, the kill count will increase by one.

* Hyper item : When collected, it gives your ship an added burst of fire-power which can be used when shooting a beam, and will last as long as your ship does, but it doesn't absorb bullets, meaning you remain vulnerable. Technically, it does let you absorb bullets for a few seconds by holding down the bomb button. This can only be done once during a hyper and allows you to escape from a tight corner if there are too many projectiles coming your way.