Kei and Yuri, two cute space investigators, are the heroines of this side-scrolling action game by Bandai and based on the popular animation series Dirty Pair. A distant planet is suffering civil war and the two girls are sent to investigate the situation. The players starts by taking control of the red-haired Kei. She can jump and fire using her laser-gun and the goal of the fist part of the game is to reach the enemy's lair. Once there, Yuri joins the party on a flying-bike. If Kei can make it quickly enough, she can jump on the bike and fly through the rest of the stage. However, make sure she doesn't hit a wall or any obstacles on the way or she will have to finish it on foot. Once their destination is reached, the game switches to a more static room mode where Kei infiltrates a building and move from room to room, looking for items such as floppy discs and unlock doors. This part definitively brings in a degree of adventure element to the game. A two simultaneous player mode is also available and get Rei and Yuri into battle as the same time. 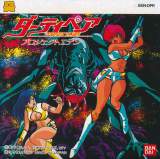