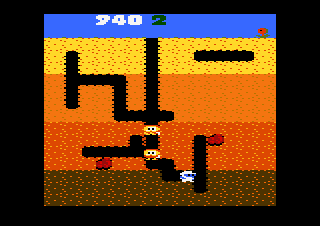 Dig Dug starts each game with five lives. After he burrows on his own, use your controller to send him where you want. When he enters a tunnel where Pooka is lurking, the monster begins to chase him. Explode Pooka quickly by pressing and holding the controller button, or by pumping it repeatedly. Pumping the button just once or twice will stun the monster so Dig Dug can slip past.a Touching Pooka when he's not stunned will knock Dig Dug out.

Dig Dug can handle Fygar in almost the same way, but dragons breathe fire, so be careful if Dig Dug approaches him while he's looking. It's not enough to be just outside his tunnel when he's looking, either, because his fire is so powerful that it burns a short distance through the earth. Still, attacking him from the side is worth more points than attacking from above or below.

Another way to handle the monsters is to drop rocks on them. To do this, make Dig Dug tunnel underneath a rock when one or more monsters are chasing him. If he's tunneling upward, have Dig Dug make a sharp turn just before he reaches the rock so it falls on them! If Dig Dug is tunneling sideways, time him so the rock falls just as the monsters run underneath!

After two rocks have fallen in any round, a veggie or fruit appears at the center of the earth for ten seconds. If Dig Dug can gobble it up, he earns extra points.

But there's something very strange about Pooka and Fygar. Unless Dig Dug destroys them quickly, they turn into ghosts and move through the ground directly toward him. As soon as they enter a tunnel completely they become solid again, but while they're still ghosts, Dig Dug can only drop rocks on them.

The last monster left in any round gets scared of Dig Dug and turns to the surface, turning into a ghost if necessary to make his trip as fast as possible. Once on the surface he scampers to the left of the screen. To catch him, Dig Dug has to race toward the surface himself.