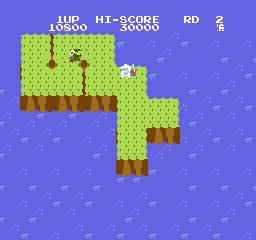 Dig Dug II is a platform game by Namco, conversion of the arcade game originally released in 1985. It is the sequel to the classic Dig Dug - however, the action doesn't take place in underground tunnels anymore, but rather on small tropical islands out in the middle of the ocean. The goal of the game is still to burst all the enemies (the red Pookas and fire breather Fygars) that wonder around the screen with the help of an air-pump. Four shots from the pump will cause any enemy to explode. But this time, the drill has a totally different use - instead of drilling endless underground tunnels, the tool's main purpose is to create cracks in the ground. Large stakes located on each island can be drilled to create small cracks in the direction Dig Dug is facing. Once a crack goes all the way across a section, the smaller portion of land collapses into the sea and sends any enemy still standing on it to their doom. Dig Dug must use the drill carefully and wisely as he might fall off himself and slip into the sea. Cracks have another function and enemies can't cross over them unless they turn into their (slower) ghostly forms. Finally, special items (such as fruits and vegetables) randomly apprear on the playfield or when Dig Dug cuts off three portions of an island.