Dig Dug Deeper is a 3-D remake of the arcade classic "Dig Dug" for PC's running Windows. All elements of the original game are present, but new elements have also been added. 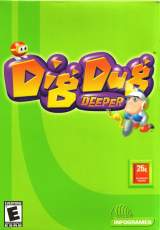