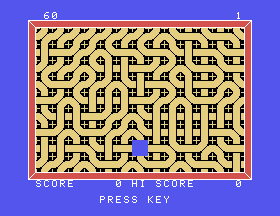 DIABLO, which derives its name from a European game of a half century ago known as DIABLOTIN, consists of 232 sections of track, two tracks on each of 116 movable panels. Players try to arrange the convoluted track to keep a moving ball on a continuous course. After a section of track has been traversed, it is removed from the board, thus reducing the available remaining track. The game becomes increasingly more difficult as less and less track is available to support the ever-advancing ball. Excellent graphics and sound support this game which requires substantial strategy, planning and control. Finding so much activity and variety in a program is truly surprising.

DIABLO is a machine language game and is AUTO-LOADING (insert data-pack
or diskette and pull the RESET button).

Diablo was one of the first 3rd Party programs released for the ADAM.
SOURCES
Game's ROM.
Game's screenshots.