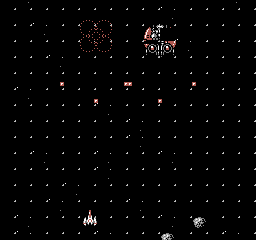 Dezaemon is a vertical shooter editor developed and published by Athena. More than offering a playable shooter (curiously called E.D.I.T), Dezaemon gives players the unique opportunity to create their own vertical shooters. The game's main screen displays a plethora of options that can be edited and saved onto the over sized game cartridge's ROM - player and enemy ship sprites, attack patterns, weaponry, explosions, background elements, bosses, music, title screen and even the staff roll/end credits! A graphical editor allows the player to modify the game's existing sprites or to draw entirely new ones. However, and because of the obvious hardware limitations, Dezaemon only offers sprites made out of 16x16 pixel square tiles (which can be combined to create larger foes), and limited to a four color palette each (although black is reserved for transparency). A couple of other editors also allow the player to build or modify in-game levels (the game features three playable levels) as well as enemy and power-up placements. As previously mentioned, Dezaemon proposes a sample game comprised of three levels, in which the player fights waves of enemy ships, collects special items (Speed or Shields) or upgrades his weaponry (from Vulcan to Lasers or Missiles). All the menus from Dezaemon are in Japanese, so anyone not familiar with the language should expect a bit of trial and errors.