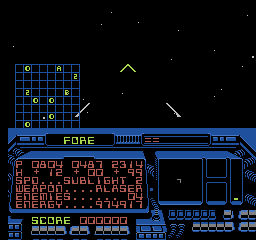 Pull out of warp speed and lock on your Neutron torpedoes - now! Your 360 degree radar swipe has detected hostile Kojan fighters!

Sight ''em and shoot 'em, one by one. Then hyperwarp toward their deadly Base Station and overtake it... from the inside! Blast alien spaceships with your front-end lasers and heat-seeking rear-firing missiles.

Mission complete? Hardly. It's on to the next star system, where more enemies lie waiting. Waiting to keep you from your long awaited return to... Destination Earthstar!