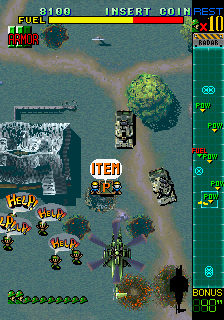 Desert War was released in September 1995.

Developed by Nihon Maicom Kaihatsu (NMK). Desert War is their last video game development. They went into bankruptcy in August 1999.

After developing this game, NMK was supposed to develop a new video game called 'space war'.

This game is known in Japan as "Wangan Sensou".

* Fast Move : When prisoners go to heliport, you can tap the 'A' button for speed up.

* Good Ending : You should destroy the final boss without lose your armor.