Desert Patrol is a timer based, single player game. Players shoot at various aircraft targets flying on screen from left to right or right to left with a mounted machine gun on the control panel. The objective is to successfully shoot down various aircraft targets consisting of planes, jets, and a helicopter within an allotted amount of time. The time setting is operator adjustable with a pot for speeding up or slowing down of how fast the time counts down to zero.

If an aircraft is successfully hit, a figure then appears on the screen as a parachuting pilot. Players have to avoid hitting the pilot or else points are deducted from point total and also the ability to shoot gun is disabled for a few seconds. This is the penalty for shooting down a parachuting pilot. 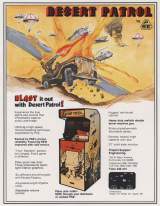