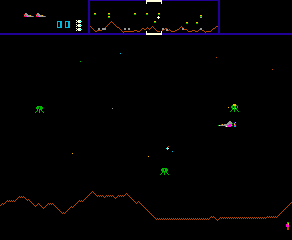 This bootleg of "Defender" resulted in a far-reaching legal decision in US copyright law. Williams sued the distributor of the game, Artic International, for copyright infringements of 1) the game's ROM code and 2) the 'look-and-feel' of the attract and play modes.

Artic never contested that the 'Defense Command' ROM code had been lifted from the Williams "Defender" game; over 85% of the code was identical in both games. However, Artic argued that ROM chips should be considered as 'utilitarian objects', much like common knobs and gears which are beyond the scope of copyright law. Artic had used this argument unsuccessfully in a similar case against Midway Manufacturing.

The court reaffirmed the previous legal decision against Artic. Under US copyright law, intellectual property can be protected if it is made permanent in some way (known in legal terms as 'fixation'). Computer code stored in ROM chips met this requirement. Artic lost its case against Williams.

The Midway/Williams decisions against Artic set an important legal precedent : compiled computer code was protected under copyright law regardless of the medium of storage.
SOURCES
Game's ROM.