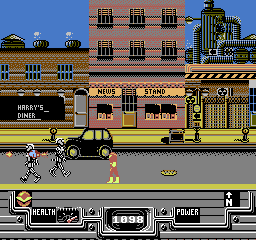 Battle your way through sewers full of Gatomorphs and Loogiehawks, streets crawling with rabid robots, and the malevolent Mega Mall, where you have your showdown with Atom Ed, the floating head. And then you're ready for Dr. Mayhem himself!

Defenders of Dynatron City was released in July 1992 in North America.

The game won praise in its preproduction by many video game magazines for the creation of an original superhero team. However, when the game was released it was widely panned by video game critics for, among other things, having a notoriously poor hit detection that required extremely precise aim for attacks to hit enemies.

The game was adapted into an animated pilot by DiC Entertainment. It failed to be picked up and was released on VHS. It featured the voice of Whoopi Goldberg, Tim Curry, and almost Christopher Walken. Fox Kids aired this pilot as a special on February 22, 1992.

The character Buzzsaw Girl appears on an calendar in the house of the carpenter in Monkey Island 2 - LeChuck's Revenge.