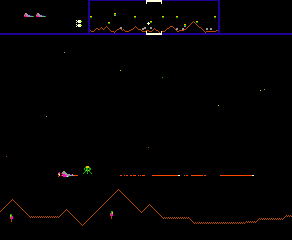 Defender is a legendary sideways-scrolling shoot-em-up - the very first of its genre - in which the aim is to pilot a laser-firing spaceship and protect humanoids stranded on the planet's surface from swarms of alien abductors.

A long-range scanner at the top of the screen shows the positions of both the humanoids and the attacking aliens. The ideal strategy is to shoot down the alien ships before they reach the humanoids. If a humanoid is captured, the alien abductor can still be destroyed, but the player must then catch the falling humanoid and return it to the safety of the planet's surface before it falls to its death.

If an alien is allowed to carry its victim to the very top of the screen, the humanoid will mutate, becoming a permanent part of the alien that captured it. This new and deadly mutation will then immediately join in the alien attack.

The challenge becomes more intense as action progresses. Fighter ships and their mines will soon join the abductors. There are also mother ships that must be destroyed; these are particularly difficult as a direct hit smashes the mother ship into a swarming mass of mini-ships that must also be wiped out. Throughout the entire mission, the player must act quickly or face possible destruction by the cosmic baiter, a fast and dangerous enemy.

Players have two escape options to use as a last resort. The first is the 'smart bomb', which destroys all on-screen enemies. The second option is 'hyperspace', which randomly teleports the player's ship to another part of the level. This is highly risky as it may place the player's ship in a position more dangerous than the one it left.

If all humanoids are successfully abducted, the planet will explode in a blinding flash and the waves remaining until the next planet is reached take place in outer space, and consist solely of destroying enemy waves.