Deep Dungeon is a role Playing Game by HummingBird Soft. Humanity and forces of evil have been fighting for centuries. One day, a courageous and strong swordsman went to confront, alone, this evil spirit. The devil, nearly defeated, had to run away and hide underground with his army. Time passed, and most people simply forgot about their existence. Then one day, they slowly came out of their hideout and kidnapped the king's daughter. A swordsman is sent by the king to rescue the princess, armed with the legendary sword and shield that defeated evil once.. yet, he hasn't returned. And you are one of the young adventurers who are now going on the journey to the depths of hell and rescue the king's daughter. Mad? Senki is a role playing game featuring a simple first person-view through the hero's eyes. He can equip a sword, a shield and a bracelet. Shops are located near the Dungeon entrance and new weapons, shields and items can be purchased there. 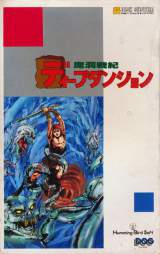