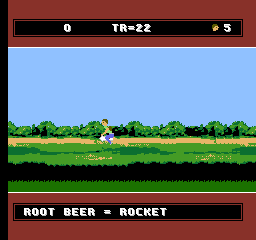 David Crane's A Boy and His Blob - Trouble on Blobolonia © 1990 Absolute Entertainment, Incorporated.

Look! He likes them!

Likes them? The boy's Blob loves them! Jellybeans, that is. In every flavor under the subway. Like Vanilla. Apple. Tangerine. Cinnamon. Cola. Coconut. And more.

Like many boys in the twenty-first century, the boy has a buddy from outer space. This one's from Blobolonia - a place where an evil emperor makes everyone eat only marshmallows and chocolate. In fact, for the emperor, healthy things like vitamins are poisonous.

Blob (his full name is Blobert) came to Earth looking for someone to help him defeat the evil emperor. That's how he met the boy.

To defeat the evil emperor they boy and Blob will need a goodly supply of vitamins. And to get the vitamins, they'll need money. To get money, they'll search the underground caverns for hidden treasures and diamond stones.

So what's a boy to do? Just whistle! (That'll call Blob.) Then feed him jellybeans.

You see, the boy miraculously discovered that not only does Blob love jellybeans - but that different jellybeans turn Blob into different shapes. And that those shapes can be used to get through many otherwise impossible situations!

With his repertoire of shapes, Blob can help the boy overcome even the most outrageous obstacles - as long as Blob gets the right flavored bean. In fact, with enough jellybeans in enough flavors, anything is possible.

* Tempting tips (from the USA manual):
- To put a little distance on a tossed jellybean, take a step while tossing it.
- Be careful where you carve your holes. It could be a long way down!
- Whistling is one way to bring blob closer to you. But if you're trying to position him in a critically precise spot, change him into a blow torch so he can easily be picked up and moved.
- Never go too far without letting Blob catch up. If you lose him, you're out of luck. Unless, of course, you can make him ketchup.
- To increase the height of a jump on your trampoline, press the Up arrow. To decrease the height, press the Down arrow. To jump off, move to the side at the pinnacle of your jump.
- Remember: after you've collected all the treasure, you'll still have to return to the street, get to the health food store and purchase the vitamins.
- There's more than one way to stop a candy machine.
- Experiment! Experiment! Experiment!