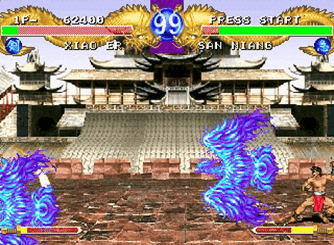 China. Sometime in the 11th Century A.D. The Time when warlords lived as kings... Here in the shadow of the Liang Shan Mountains, the 11 strongest outcasts, out of 108, gathered on the marsh to test their battle skills while the Gods of War watched from above.

Surely, there is one among the 11 outlaws, led by Song Jiang, who is strong enough to challenge the evil regime in the Forbidden Palace! Let the search for that hero begin here and now!

Dark Legend is the U.S. Sega Saturn conversion of Data East's arcade fighting game Suiko Enbu (Outlaws of the Lost Dynasty). The Japanese version gave players a choice between "Arcade" or "Special" modes. Special speeds up gameplay by making moves much easier to perform in addition to adding Desperation Moves to each character and making the final boss a playable character in 2P Battle. The U.S. version defaults to "Special Mode" and cannot be changed to "Arcade Mode".