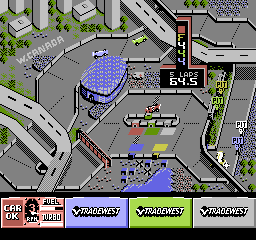 You've played it in the arcades... Now play it at home! Settle into the cockpit of one of the world's most powerful racing machines. Listen to the engine roar as you accelerate to break-neck speeds in a matter of seconds. An engine, tire or fuel loss may slow you down, but you can count on the split second performance of your expert pit crew to get you back on the track for your winning lap. It won't be easy... After all, you're racing against Danny Sullivan! But use your winnings to hone your car's performance to a razor's edge, and the championship may be within your grasp. You'll work your way up through 8 grueling tracks to the ultimate challenge: the Tradewest Speed Bowl. If you're ready to race with the big boys, Indy car competition doesn't get any hotter than this!