The players takes control of a World War II plane and fights his way through a vast array of enemy air defenses such as tanks, submarines and battle ships (curiously, there aren't any enemy planes in the game). Our fighter plane can use a classic Vulcan gun and a special, but limited, bomb attack. The latter calls a formation of friendly planes that will shoot at will until they eventually get hit. Pressing the bomb button twice triggers a powerful smart-bomb and wipes out most of the enemies on screen.

A standard power-up system upgrades the plane throughout the game - destroying tiny truck usually frees up power-icons. Some, stamped with a large character P on them, upgrade the plane's main gun up to four times. Others give away extra bombs or rare extra lives. 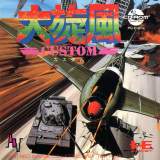