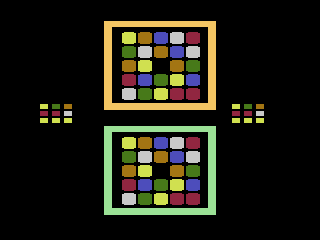 The screen consists of two cubes, with player one on the top and player two on the bottom. Each cube has 24 squares plus one blank square (5x5). At the start of the game, the squares are randomized and a 3x3 pattern is generated. The player must make the 3x3 center of the cube match this pattern (ignoring the 16 squares in the outer ring). The player can move the squares by sliding them one at a time into the blank square. This concept should seem familiar to anyone who has played the old sliding puzzle game. Once you match the pattern, you win! Since there's no computer opponent to play against, the player must simply try to solve the puzzle in the fewest number of moves as possible. The two player games are a bit more fun, with two players trying to solve their cube first.