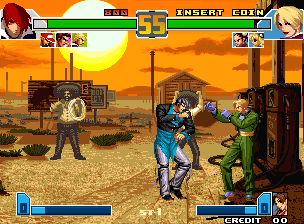 Crouching Tiger, Hidden Dragon is the translation of the name of a Chinese book 'Wohu Canglong', which was made into an Oscar-winning movie in the past few years. Like many books at the time, this was a volume in a series of books.

What is the difference between CTHD2003 and KOF2001?
* The attract mode sequence contains art from previous KOFs (too many to count, but it looks like art from every previous KOF was included).
* The 'K' in KOF is altered to look like a 'P'. This shows in the 'POF' logo (taken from the KOF logo in '96) and the 'How to Play' screen (taken from KOF '99). 'POF' could stand for 'Plain Old Fighter' ;)
* The layout of the character selection screen is different - although on the character screen layout, the teams are arranged differently, the same 2001 teams battle you in single player mode (for example, Kyo on the character selection screen layout is with Iori, Terry and Takuma, while if you were fighting against Kyo in single-player, his teammates would be Benimaru, Daimon and Shingo).
* Home console mode was removed entirely, instead of being semifunctional.
* No cutscenes, winquotes or endings (The winquote screen only has a portrait of the character used to win the match and the score in single play and the endings and credits are replaced with the logo of the hack).
* Igniz is replaced by a ball of fire.
* Zero is engulfed in flame.
* Each character does not have their trademark colors (they're closer to the C/D 'color rejects' you'd find in KOF 98 or 2002, but they're not those, either). Strange costume colors which were never seen in the official KOF releases appear.
* Most moves are augmented with special effects (e.g. Terry's Crack Shoot flames the opponent and it never does in any other game), but they're only for show. Otherwise, each character has its repertoire of moves from 2001.
* According to the 'How to Play' screen, six stocks are the maximum, no matter how many strikers you have (but that's a lie - the 2001 rules apply).
* The font of the text, as well as some of the 'interstitial' graphics (background art in the team order screen, etc.), is different. Some say it's a good thing.
* Except for the final boss stage, the stages are all ripped from other games :
China : "Street Fighter Alpha - Warriors' Dreams" (Chun-Li's stage)
Japan : "Street Fighter Alpha 2" (Ryu's stage)
Brazil : "The King of Fighters '94" (Ikari Team stage)
Italy : "The Last Blade 2" (Fire at the Wadamoya)
Mexico : "Art of Fighting 3 - The Path of the Warrior"
USA : "Street Fighter Alpha 2" (Ken's stage)
Korea : (unknown)
Zero : (unknown)
Igniz : (unknown)

* Tiny Characters : to minimise your fighter, press and hold START at the characters selection screen.