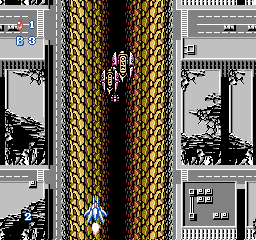 Crisis Force is a vertical shooter by Konami. In the year 19XX, an army of mysterious robots descend from the sky and trample Tokyo city, destroying everything in their wake. Humanity's survival lies in the hands of two skilled pilots - a boy and a girl. On board their shape-changing Aura Wing fighter, they rush to the Japanese capital, ready to take on the invader's running attack led by a powerful humanoid flying machine. Each fighter can switch to three ship configurations at anytime during the game - the first one only fires straight forward, the second shots forwards and backwards, and the third configuration shoots forwards and sideways. Power-ups come in two main flavors - red power-pods upgrade the laser capability of the ship whereas blue ones increase its firing power. However, they are mutually exclusive and the ship can only use one weapon configuration, or the other. Furthermore, an array of extra power-ups are also there for the taking - blue 'S' pods speed up the ship (or slow it down if they are red), 'B' pods add a bomb to the ship's arsenal (which can be activated by pressing the two action buttons together) and special Ring pods accumulate energy. The latter are a central part of the gameplay and collecting five of them (usually dropped by enemy formations) transform the fighter into a highly destructive and invincible large ship for a short amount of time (interestingly, both players control this ship in two-player mode). Crisis Force consists of seven stages and features a two simultaneous player mode.