3-D action game. Each character plays exactly the same except for the type of weapons they wield and their movement speed. All characters start with a machine gun and flamethrower, but the remaining two slots are for character-specific weaponry. The game plays from an isometric angle. Since the game takes place in three dimensions, enemies come from all angles. Ducking and strafing have been added to the player's abilities, as well as an auto-aiming feature to help attack airborne enemies. Jumping has been slightly changed as the characters no longer do tightly curled somersault jumps (a feature in every previous game since the arcade version of the original Contra). The player's progress can be saved to a memory card. 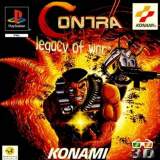