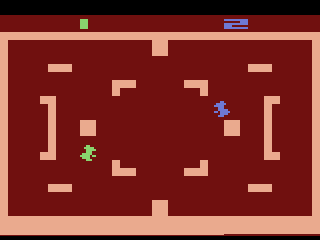 A 2-player tank game where the object is simple - shoot your opponent's tank before they shoot yours. There are 27 game variations, some of which let you play with airplanes instead of tanks.

6-9: "Tank-pong" levels, where the players' missiles bounce off walls. In the "billiard hit" levels (8 and 9), there's an additional rule that a missile must bounce at least once before it can hit the enemy tank.

10 and 11: Invisible tank levels, where the tanks only become briefly visible when they shoot, bump into a wall, or are hit by a missile. Both of these give the players guided missiles.

15-20: Biplane levels, where the players fly planes that are constantly moving forward and wrap around to the other side when they fly off the screen. Levels 15 and 19 use guided missiles; 16 and 20 use straight missiles; on 17 and 18, the players use rapid-fire machine guns. Additionally, level 19 is a "2 vs. 2" level - both players have two planes each that move and shoot together - and level 20 is "1 vs. 3", where one player has three planes while the other has a single large plane.