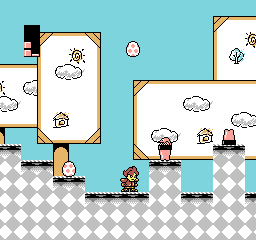 Cocoron is a side scrolling platform game developed by Takeru. Tapir, an enigmatic blue wizard in spotted pajamas from the Dream World, sends the player on a quest to rescue princess Rua. But things quickly become more complicated and the player soon has to rescue other characters along the way, such as Santa Claus, the king of Trump castle and the blue fairy Cocoron. Tapir can manipulate people's dreams and this ability gives Cocoron an unique twist - the player can assemble his own character by combining one of the eight available heads to one of the eight available bodies (which both include several designs to choose from, resulting in literally hundreds of combinations! ). More than a mere physical appearance, each part also defines the character's attributes, such as his health, speed, how high he can jump and so forth. As a rule of thumb, heavier characters are slower than light ones, but have more health and resistance. There is also a list of eight different weapons to choose from (from boomerang to shurikens, umbrellas and music notes). They all come with different attack patterns and strength - some shoot straight whereas others fire along an arc or explode on contact. They can also be powered up, and collecting five power icons (symbolized by the weapon in use) upgrades the weapon to the next level (up to a maximum of five times). Colored eggs are scattered around each stage or left behind by defeated enemies - cracking them open release all kind of items, such as health, extra lives, weapon power-ups and colored orbs. The latter trigger special events - some power up the active weapon for a short amount of time, whereas others allow the player to control slides, grant him invincibility or refill his health bar. Cocoron features a world map and is divided into five different areas - the player is free to play them in any order and, interestingly, stages change in function of the sections he travels through. Finally, up to six different characters can be created and stored, and returning to the house at the center of the map allows to switch between them.

A sequel/remake of Cocoron was announced for the PC Engine Super CD Rom system in 1993. The game, called 'PC Cocoron', was apparently completed and previews appeared in several Japanese video game magazines at the time. It also included the character customization featured in the original game - eight heads and eight bodies to choose from, as well as eight different weapons (some of them are different than the Famicom version though). However, and for inexplicable reasons, it was never officially released (maybe because of Takeru's demise). Several prototypes of the game seem to exist in Japan, but as of today, they were never released to the public. For this reason, PC Cocoron is still one of the most sought after PC Engine unreleased game.

But the Cocoron story certainly didn't end there, read on. Another sequel/remake was announced for the Sega CD around 1993. The game, known as Pop'n Land, was also developed by Takeru and was supposed to be published by Sur Dé Wave (Takeru's publishing label). Like with the original Cocoron, players could customize their characters, but this time they could do it from a list of sixteen different heads, bodies and weapons (for a total of 4096 different combinations!). The game was announced in Electronic Gaming Monthly (issue 51, Decembre 1993) and in the French magazine Joypad (issue 27, January 1994). However, and for reasons maybe due to Takeru's demise in 1994, it followed the same fate than PC Cocoron and was never officially released, and, as of today, no prototypes have ever surfaced.