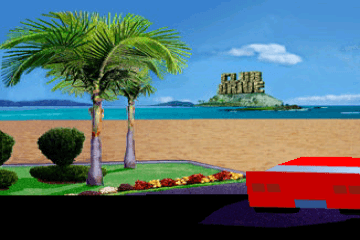 In the year 2098, where do you go on vacation? Club Drive, of course - the most exciting theme park of the 21st century.

Club Drive was opened just after driving was once again legalized. Driving had been illegal for safety reasons for more than 50 years, until Doctor Lawrence Phosphorus' breakthrough discovery.

In his distributive processing study involving safety and smart materials, the doctor developed algorithms that could be mathematically proven to be safe. Thus, the driving ban was lifted for these indestructible vehicles, and Club Drive was born.

Take Old West Exit and chase down your opponent in a fast-paced game of tag through the main streets of a real ghost town. Get off on Hairpin Drive and test your wheels in a skateboard park - for cars! Turn on 2010 Century Court and race through San Francisco. Then take Ho Scale Lane and experience what it's like to be a toy car and race through your neighbor's house.

It's your chance to do stuff with a car you've never dreamed of!

* Atari Building: Enter the pulsating wall inside the mine shaft of Wild-West World during a single player race.

* The Castle: Enter the first floor fireplace of Jerome's World during a single player race. Must have fast car option turned on.