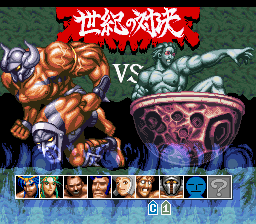 Chou Aniki Bakuretsu Rantou Hen is a fighting game by Masaya and is the third episode in the unique Chou Aniki series. All the main characters from the first two games battle here on 1-On-1 fights, from the bald and muscly Samson and Adon, to Idaten, Benten and even the emperor Botei Bill himself. All the classic Chou Aniki ingredients are reunited here - men showing off their prominent and well-developed muscles with little clothing on, and odd but truly unique mechanical designs. A grand total of eigth characters from the original game are playable here. Each character naturally comes with their own sets of moves and each one of them can fire a large laser-blast to momentarily stun their opponents. Yet, Chou Aniki Bakuretsu Rantou Hen is not your typical fighting game - the game actually stands out from its peers by the way how the fighters fly around the arena and are completely airborne.