Chiki Chiki Boys is a cute side scrolling action game by Nec Avenue and is the conversion of Capcom's coin op. The kingdom of Alurea is at stake. An evil clown and his army of blue goblins, mean bean pods and two headed giant turtles have invaded the land and two courageous twin brothers appear to be the country's only hope. Their duty is to retrieve the legendary Dragon Blue Eye, a magic stone which is said to hold the power to save the world. But to do so, they first need to earn the powers of the gods and meet three of them in their shrines - the Earth, the Heavens and the Ocean. Consequently, the first three stages of the game can be played in any order and completing them unlocks the last six levels leading to the clown's lair. Each boy is armed with a sword and a small shield. Countless treasure chests are also hidden throughout the game and contain coins and various special items - some of them are pills that replenishes the player's health, other grants him a temporary invincibility. But the boy's greatest assets are the powers from the gods that can be found inside large clam shells. They come in different flavors - walls of fire, bouncing balls of energy, typhoon and so forth - and cause damage to most of the enemies on screen when used. A two simultaneous player mode is available. 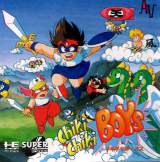