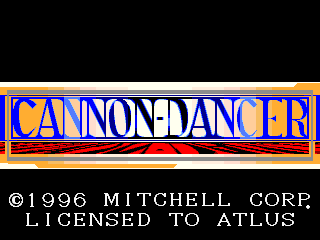 This game is known outside Japan as "OSman".

This game is often compared to "Strider", and the main reason for that being because in the early 90's several Capcom employees went to Mitchell including Isuke, the original Game Planner for Capcom's "Strider". He is credited as the sole designer for Cannon Dancer which is why the two games are so similar.

* Cannon Dancer's movements :
Sliding - Down + B Button.
Dash - Hold Left or Right after Sliding.
Throwing - B Button in Jump or Sliding.
Kizami-Mai - Shake the joystick during Attack.