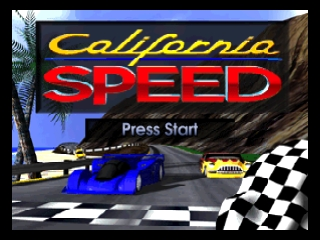 "Why mess with success?" must be the mantra at Midway Entertainment, which has ported yet another arcade racer to the N64.

Like San Francisco Rush and Rush 2, the action in California Speed swerves far into fantasy land. The Mount Shasta course spends more time in lava tubes than above ground and the Central Valley track concludes with a full-tilt dash through a (thankfully) vacant shopping mall. Most ludicrous of all, the Silicon Valley file terminates with your nanovehicle negotiating a jungle of diodes, chips and printed circuits.

Longtime N64 players will recognize the whimsical handiwork of developer Atari Games, whose previous high-speed flights of fancy include the two Rushes. But while the earlier games challenged players to discover shortcuts and execute airborne stunts, California Speed is a point-to-point speed demon par excellence.

While speeding through La-La Land, you won't find spectacular crashes nor the cheap thrill of turning around and ramming the competition head-on. Compared to the demented detours of the two earlier games, California Speed's shortcuts seem tacked-on. And there are no turbo boosts, no nitro boxes a la Beetle Adventure Racing, and none of the weapons that make S.C.A.R.S. and Penny Racers nonstop fragfests.

Instead, your main challenge is to avoid errors at all costs. The field thins out soon after the start, so there's little of the high-speed weaving through traffic that makes Cruis'n World so exciting. Instead, you must elude oncoming traffic, which has a nasty way of appearing just as you're taking the inside line on a curve.

You can also lose valuable split-seconds if you rear-end a slowpoke in your lane. Scraping a guard rail in the home stretch -- something the drone cars never do -- often means the difference between first and fourth.

California comes with an impressive 11 point-to-point tracks, plus five hidden ones in such exotic locales as Fiji. The point-to-point tracks are long, easily lasting more than two minutes each, with checkpoints. The hidden tracks play much more like real-life race tracks with multiple laps, but have their fair share of split routes.

In both one- and two-player modes, California Speed offers you a choice of a single race in a field of eight vehicles or a practice run, in which player-controlled vehicles get a free run on an open track. Both modes offer a choice of five circuits:
Light - Default vehicles include a cool convertible and a golf cart that's zippier than you'd think
Sport - Muscle-car city, plus your granddaddy's open-cockpit roadster
Heavy - A big ol' Caddy ragtop, a low rider and a cherried-out pickup. Do good and you'll access the cleverly named Oval track and the busted-up San Andreas course
State - Do the state with any of 10 cars, from light to heavy
California Cup - The same 10 vehicles available in the State circuit, but if you fail to win, place or show it's adios

The 12-vehicle menu has something for everyone, from a quaint but quick British roadster to a snazzy ragtop. The nine hidden vehicles include what looks like a New Beetle (all the cars are given fictional names) and a 40-foot camper.

As with the two Rushes, California Speed's graphics are wisely tuned for speed, not detail. The game drops nary a frame, even with eight vehicles on screen. The vehicles lack the detail of those found in Cruis'n World (yet another Midway racer, albeit one published by Nintendo).

Fog is practically nonexistent when you're the human on the asphalt, but the developers had to cram in a bit more in two-player mode. There is no reflection-mapping on vehicle windows. Except for some pixilated trees, the landscape art looks sharp, if a bit on the simple side.

Midway may have made one too many stops in the pits before rolling this one out. But if you're in the market for a racer with plenty of tracks and not much in the way of strategy, California Speed just might be your box of bolts.